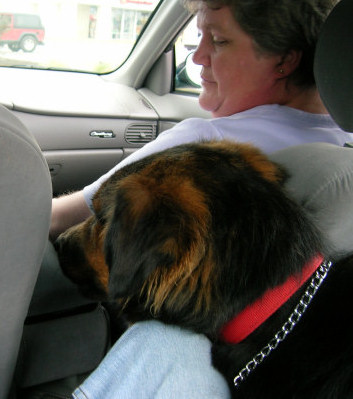 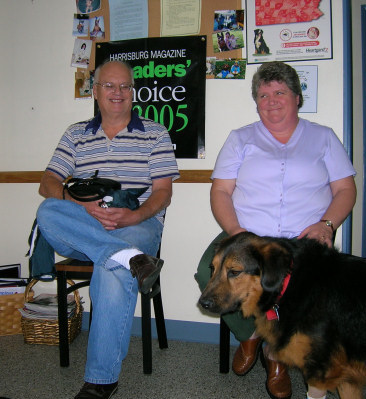 Apologies for the fragmented nature of my updates here. Obviously, we've had our hands full :-). Today's pics are of Dreyfus with his Grandpa and Stepgrandma, as we were checking him in to his weekend home.

Short update: I'm typing this by Dreyfus' side, at the emergency vet, Saturday @ 7:00PM. I'm sharing a roast beef sandwich with him, his second of the day. His numbers are stabilized, but his kidney numbers are still high. His calcium is all the way down to the normal range. He is still a very sick boy, but there is a good chance that we'll get to address the (suspected by still unconfirmed) Lymphoma as appropriate, instead of worrying about short-term tactical issues like the last two nights. At noon today he actually started showing an interest in *food* (Arby's Roast Beef... YUM!). It was the first time I've seen the "real" Dreyfus since Wednesday, and it did me a world of good to talk to him. I had a heart-to-heart with him, and promised to continue doing what is right for him. I want, now as always, to give him a high quality of life. When I can't do that... well, I'll do what I have to do :-\.

Due to some unfortunate timing, we won't have the results of his Thursday-night biopsies until Monday morning, so he'll be staying at the emergency vet until Monday. The vet-tech gal who is working with him is cute, so clearly Heavy D (a.k.a D-Lover, a.k.a Dr. Dre... picking a good rap name is so hard) is living the life of a rock star: Women, drugs, and a "Live Fast, Die Young, and Leave a Good-Looking Corpse" attitude :-).

OK, now that I've got the updates done, and I have some time, let me give a complete rundown of what Dreyfus has been going through. Apologies if I missed any of this in previous updates. I'm doing this from memory, so I might be off on a few details, particularly Thursday and Friday:

Saturday, Sept 16: Dreyfus' Auntie Jennifer from NC came up for a visit, and he was his normal perfect self.

Monday, Sept 18: Didn't eat breakfast, so I called Dr. Crawford (his normal vet). Dreyfus was due for his phenobarbital (seizure medicine) blood check anyway, so we did our normal six-month checks. Dr. Crawford gave him an anti-conlvusive, and some prescription food which smelled like crap, but apparently that's a good thing in DreyfusWorld because he ate a can of that stuff for dinner.

Tuesday, Sept 19: Dreyfus didn't eat all day. His numbers were all good, except his kidney numbers were a bit high. Dr. Crawford suspected the kidney numbers might have been off from the recent trauma. Plan was to give him until Thursday, then reevaluate. Dreyfus Drank/puked around midnight.

Wednesady, Sept 20: Still not eating. Called in the afternoon and made an appointment for Thursday morning.

Thursday, Sept 21: All hell broke loose. Dr. Crawford was busy, so Dr. Vukovich (same clinic) handled the case. She first suspected Lyme disease, but that test came back negative, so she ran calcium numbers, and they came back high. This is bad. High calcium is usually an indicator of some kind of tumor in his system. She kept him for IVs, and scheduled an after-hours appointment with Dr. Kirmayer for ultrasound. Dreyfus was *very* lethargic. Dr. Kirmayer didn't like the situation at all. Dreyfus' calcium levels were life-threatening, and apparently the ultrasound showed clear indications of Lymphoma. He took biopsies of the liver and spleen, but these samples wouldn't go to the lab until Friday, which means they won't come back until Monday. The first course of treatment for Lymphoma is, luckily, not a risky move even if the cause of Dreyfus' problems are something else. So Dre got a massive dose of steroids, a chemo drug, and an introduction to 24-hour emergency vet. My father drove down to be with me, for which I was very thankful. I was quite a wreck.

Friday, Sept 22: My father and I picked Dreyfus up at 6:30AM. The emergency vet turns into a normal vet at 7:00AM, so referals from other vets (e.g. Dreyfus) have to be picked up and moved before the normal vet opens. Dreyfus spent an hour or so at home before we took him back to Dr. Vukovich, who kept him for the day. He was able to flush enough calcium out of his system that the calcium was no longer life-threatening. But his kidney numbers went the wrong direction during the day. So once again, we took him back to the emergency clinic. Dreyfus was so lethargic it broke my already broken heart. I spent Friday night expecting to have "the talk" with Dr. Vukovich Saturday morning. My father and stepmother both came down to be with me. I can't express how helpful it was to have them here.

Today: During the layover between the emergency vet and Dr. Vukovich, Dreyfus was able to direct a lot of energy to getting water, but not much else. His kidney numbers went very slightly in a good direction during his visit with Dr. V., and his calcium numbers are all the way back to normal. In the second layover (11:00am-1:00pm), Dreyfus was mostly his normal self. He even (for the first time since Monday!!!) showed interest in food. Per Dr. V's suggestion, we tried offering him some Arby's Roast Beef. Apparently Dreyfus likes that stuff! We took him back to the emergency vet, where he will be camping until Monday morning. Monday morning we will shuttle him back to Dr. Crawford (Dr. V will be out), and we should get the results of his cancer tests from Dr. K. We are very much in wait-and-see mode with the cancer, as we have no idea what the tests will tell us. The best-case scenario for Lymphoma appears to be: It isn't too far developed; Dreyfus is at, or can get to, a level where he can take chemotherapy for the Lymphoma (Lymphoma generally responds well to chemo), and the chemo knocks the Lymphoma into remission, which buys an indeterminant amout of time, possibly up to a year or two. The worst-case scenario for Lymphoma is simply that we caught it too late, or that Dreyfus' organs took too much abuse to even try to fight it, or that his quality of life wouldn't be good enough to justify trying chemo, or that it wouldn't work. Dr. V told me today that things are simply "out of our hands, and we have to wait and see". This is not a concept that I'm good with, in general. But I accept that the situation is what it is, and I have a responsibilty to Dreyfus to be strong and let my love for him be the force that drives my actions.

Thanks to everyone who has been emailing or calling. My apologies if I haven't been able to respond. I'm glad to know everyone is thinking about Dreyfus and me.